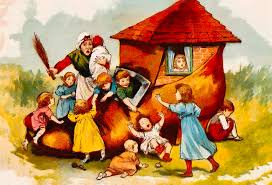 That little old woman who lives in a shoe?

She’s there ‘cause she didn’t raise Little Boy Blue.

He was ‘spose to be tending the sheep each day;

instead, he was having a roll in the hay.

Each day he rolled with a different girl-

It began with one flaunting her forehead curl.

He’d heard from Jack Horner she was “very good.”

Jack BeNimble said she was “horrid” – but would.

So Curl Girl was Friday’s roll up in the loft;

Bo Peep rolled on Tuesdays, that same hay so soft.

(in all things arachnid she was quite well-versed).

and each of them thought, “someday he’ll marry me!”

The rolling continued along through the years,

with Bo peep the first one to end up in tears.

“I’m pregnant.” she cried, as Blue slept on the job.

“He’s worthless,” she knew, and continue to sob.

Each rolling girl came, one by one, with this news –

but Boy Blue just lay there,

so she called all Blue’s hayrolls and all his kiddos:

“Let’s go in together and get our revenge,”

and watched as their faces contorted and twinged.

Their ideas took root as they simmered and stewed –

they gave him the boot…..now they’d give him the shoe.

So off to the hayloft they stormed in a huff,

rolled him their own way, clicked his wrists in handcuffs,

marched him down to his mama, told her their plans.

With Blue in his handcuffs, they’d tied her own hands –

and just as they’d said, she knew just what she’d do:

she’d give up the family farm for a shoe!

She’d be tending her grandkids

as she’d been told

all leathered and laced up and Mother-Goose-soled

And as Boy Blue sleeps on in the shoe’s dark toe,

her offspring is woe!