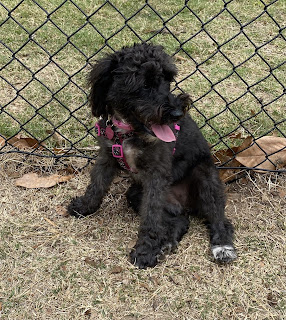 The deer conversations of the morning are nothing like what happens next in the timeline of a day in the life of one of our boys. There are all these lizards that bask in the windowsills of our house and drive our fearless Schnauzer, Fitz, to the brink of insanity  –

Broad Headed skinks, Five-Lined skinks, Fence lizards and Chameleons. This whole daily charade starts each day when the sun rises over the Johnson Funny Farm pines situated along the eastern boundary of the farm and warms the Savannah Gray bricks in the Reading Room windowsill overlooking the southeast edge of the pine forest. Fitz is long awaiting their appearance before they ever arrive – he lies in wait on the olivaceous ottoman and calculates his newly-devised attack strategies. Generally, he begins with the whiny alert that there is a considerer who pokes his head up and flagellates his tail before he ever commits to actually sprawling out into the full lizard bask – this goes on for fifteen minutes or so. He escalates to a high- pitched short bark just before any of his reptilian enemies relax – just enough to keep them wondering if the glass will offer protection from Fitz’s futile hunt for the day. Once any of these slithery specimens settles in enough to close its eyes, the full-on glass pawing begins – and sometimes on the inside sill to add noise and violent vibration, like bed-digging clear to China.

The serious manner of his imparting fear and intimidation into his lizards is real to him and comes with a sheer passion to not only protect his people but to someday succeed in the art of the hunt – to bring home a trophy just like a farm cat would, dismembered and mostly mauled beyond recognition except for perhaps half a head and a set of spindly claws from a foot.  For Fitz, the whole encounter must be a lot like watching a hunting show on TV – all the while knowing that just like you will never win a new car watching The Price is Right in a game show, you’re never going to catch a lizard on the opposite side of a window pane. But still – your excited heart is drawn into the rush and you can’t let it go.

There are no conversations between Fitz and these lizards as there are with the deer – at least not that I have overheard. He is not threatened by them in the least – he simply wants to tear them apart and be praised by his people as a great and legendary lizard hunter.  Oh, for that day to arrive!

Meanwhile, on a barrier island off the coast of Georgia, Fitz’s adopted Aunt Kona, a Schnoodle seven years younger than he  – who reigns as queen of her local dog park and who is known by name to all the locals – is having a birthday party today at 5 pm inside the double fence. All the regulars and the dog owners will be there as she leads the birthday parade into the park with a portable cooler full of ice cream for the guests who are there to celebrate the difference she has made in her owner’s life in only four short months. She entered his world only through divine intervention – (understand: there is no such thing as a free female young doodle, delivered in the arms of a man wearing a Florida State University t-shirt who drives three hours to meet you halfway for the drop because he’s going through a rough divorce and knows that his prayers for his dog have been answered – – this happens nowhere in this world except by the hand of God in Romans 8:28). Celebratory cheers will erupt in the park today as attendees select their choice of ice cream sandwiches, nutty bars, and other sweet frozen treats. They’ll lift their hearts in joy as they sing a birthday song to a sweetheart of a dog who has brought a band of caring folks together who all share the unconditional love of their dogs – a love that transcends all that is humanly possible.