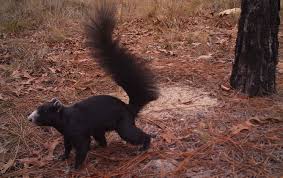 There is a certain fox squirrel….

that drives our Schnauzer, Fitz, nuts. He is no ordinary fox squirrel – he is onyx black with a tan nose, rather the size of a medium rabbit, who scampers curiously at the edge of the woods, his long bushy tail like a Jetski rooster, flagging his location as he darts about the tree line. His tailflag lowers and hangs like a damp dishrag whenever he snoozes as a black bear would on a limb, legs drooping down either side, illustrating the essence of coziness in a tree. He has absolutely no regard for Fitz, who watches from his window and barks incessantly to threaten the squirrel crossing boundaries. Fitz considers this particular squirrel even more maddening than the rest of his menagerie of lizards, deer,

and other critters all combined.

We’ve talked about this, Fitz and I. And I’ve suggested that this squirrel could be deaf, wise, hyper focused or selectively ignorant.

Deaf is a possibility, though not a strong one since he’s surviving in a territory filled with land and air predators. He didn’t get to be this age without a high degree of withitness. Hyper focus is also possible, but also unlikely because of the need to have the full 360 degree awareness of his surroundings to survive. Fitz believes the squirrel is ignorant and takes full canine offense to this selective tuning out by the squirrel, whose behavior shoes more than it ever tells Fitz that all the pine seedlings in the ground are more interesting than a mere glance at a fat black Schnauzer. But if I had to pick, I would say that the squirrel is wise and intentional in his patterns and routines. Every school kid could take a lesson from this furry rodent who does not let others get to him. He moves about his life with purpose and does not let his enemies ensnare him or rabbit-hole his efforts. He knows himself as the strong, important creature he is and does not allow himself time to stop and compare his own unique qualities to those of this fool-headed dog. He represents the true Libertarian logic “to each his own” – he is thinking : I’ll live my life, you love yours. I don’t care about your politics, religion, sexual orientation or income bracket – I’m fully supporting myself and I am capable of making my own choices without heeding your sphere of influence.

The halls of every high school would be filled with far more successful students if they took some social lessons from this clever and wise fox squirrel! Nature – including our dogs – has much to teach us about human interaction!