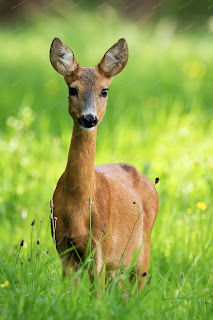 There is this sweet little doe who comes to our window and plays mind games with our schnauzer Fitz, who knows his one job is to keep wildlife at bay. But this deer won’t budge

He warns her repeatedly, but

he scoffs and growls at that remark

Fitz tries to convince her that this house has guns, too, but she refuses to believe him… she says she knows his daddy

Fitz rebukes her, insisting that she is killing the grass that his dad works so hard to maintain, but she says no – she says sees him out on the tractor and that his dad has invited her to live here and pee on any spot she likes….they talk, she tells Fitz….

she says the trails and routes that she take at various times throughout the day are her favorites she has ever made and that she will keep right on walking them, as he barks his little head off from the window. She says if he wants to bark like a fool and lose his voice, that’s his choice, that she will just keep staring at him like a caged enemy

Fitz tells her that this is no place for safety, that he has personally seen rabid foxes and raccoons, coyotes beefy enough to take her and her girlfriends and their babies down, hawks attacking small mammals, and packs of dogs fiercer than serial killers , not to mention the copperheads and rattlesnakes slithering about

she says those animals are only looking for small, black, fat Schnauzers that look like little insane German philosophers and that they do not scare her

she tells him that his dad has treated the entire property just for her with some special, safe tick dust that might kill little dogs and ticks, but it won’t hurt her…she says she heard he brought a tick to bed that attacked his mother and that his mother says it might be safer to sleep with a deer, so she’s coming indoors to sleep with us tonight in his spot – and lifts her chin and walks behind the trees

Fitz lets loose a stream of mammalian cuss words not translatable to humans and storms off to our bed, claiming his spot for a morning nap and strategizing his next mind game moves