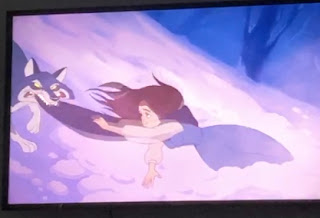 While the youngest apparently slept in, the middle and eldest texted with their mother early one morning following a night of storm spinoff tornadoes and wrapping up the weeks of circus clown and flyswatter debates.

The middle was watching a tale as old as time with his own middle and shared a quick video clip of his daughter (her niece, my granddaughter) watching as wolves chased Belle through the snowy woods.

There are real dangers in the woods, the sister says, after a moment. Just yesterday, she’d seen a video of a man sitting on the forest floor. A rattlesnake slithered up behind him and even onto his lap for a minute. She thought she might die.

Her brother says he has seen bunches of snakes, even a rattlesnake bigger than his bicep.

She says she has a healthy respect for snakes but doesn’t want a run-in like that. She remembers being on the phone with her brother one time when he shot a cottonmouth. He’d killed three water moccasins in the same place that year.

She says it sounds like a breeding ground of death but confesses it isn’t the noisy rattlesnake or the water moccasin that really scare her as much as the copperhead that quietly blends in.

Her brother says he saw a copperhead a few days ago, shortly after sending us all a video of an alligator he’d seen raised up on all fours crossing the road to the other side of the swampy wetland. Yes, he agreed, at least those big rattlesnakes can be spotted from a distance.

We came across a copperhead in the barn under the lawn mower over the summer, I told them. Good thing it was docile as copperheads go, I added, since the one who found it is usually looking up for bees and not down for snakes. He’d called for me to identify it – which was an easy call with its classic Hershey Kiss pattern right down both sides.

A guy the eldest went to school with posted a video of a copperhead the other day and it reminded her of those pictures people post labeled “find the copperhead” and she has to scrutinize the picture carefully to see it. She says she believes it’s currently baby copperhead season.

I remind them both that baby copperheads have bright yellow tails and will strike at anything.

She says she knows this about the tails and also knows they can’t control their venom.

I point out that they are like  people that way, except for the yellow tails.

The middle asked about everyone’s plans for the holidays as we concluded our group text, while the youngest apparently slept in….