A family friend asked where Mom is buried, and I promised to share the story this week. Peace about her final resting place came in a most surprising way.  As answers still do. 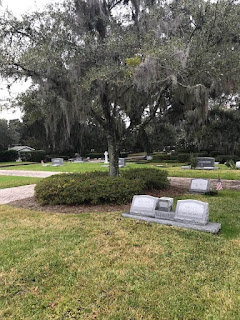 I Picked the Spot, You Pick the Plot

Time was closing in – God’s arms were cradling closer down from Heaven as Mom’s death rattle increased.  Some would say that she’d been up there since slipping out of consciousness in the days before her last breath, collecting all the dogs she’d ever loved from the Rainbow Bridge to take with her to her mansion. One thing we all knew for sure was that her final resting place needed to be closer to us than a family plot under consideration in Glennville, Georgia.  My brother Ken and I were standing in her future spot in Christ Church Cemetery when the call came.

“Come home.  She’s down to her last moments. You’ll make it if you hurry.”

I burst into tears as we sprinted toward the car. Speeding down Frederica Road, we knew divine intervention was occurring – we made it home in record time, moments from her last breath, miraculously with no speeding ticket, on a road that was impossibly tourist-jammed on a normal day.  The mother whose voice still reminds us to put on our seat belts and slow down was remarkably silent as we sped home, parallel to the airport runway with none of the symbolism of takeoff lost on either of us, trying to make it in time. We bolted inside and counted fewer than 20 remaining breaths from the time we arrived until 3:40 p.m., when she took no more.

Throughout her life, Miriam Jones Haynes’ most fulfilling days were spent on St. Simon’s Island during the years that Dad was pastor of St. Simon’s Island First Baptist Church – in the 1970s and again in the 2010s.  She loved fishing, crabbing, sewing, cooking, sunning at the Beach Club while Ken and I swam in the pool, and running.  There was never a worthwhile thing that she couldn’t do well.  And she had a knack for seeing things others couldn’t and communicating them in the quietest, gentlest ways when someone in the dark needed revelation.

When the idea of historic Christ Church Cemetery in its idyllic setting under the moss-draped oaks emerged as a possibility for her final resting place, Dad, Ken and I discussed it.  Dad was so exhausted that we could hear it in his voice.

“The two of you can decide.  I’m fine with whatever you think is best,” he told us.

Several plots in the historic section were available.  I particularly liked those better for two reasons:  1) graves of close friends Ann and Earl Swicord would be nearby, she’d have good casket neighbors; and 2) Eugenia Price’s grave and the Dodge family graves are in the historic section, and there is nothing as moving to me as the order of the Dodge graves as explained at the end of The Beloved Invader.

Ken pointed out that the new section, not as well-treed at the time, was not threatened by oak roots and had been built up on higher ground.  He liked the new section better.

I told him, in the most loving sibling compromising banter possible, not unlike the days when we fought over Matchbox cars, “Fine.  I picked the spot.  You pick the plot.”

So I chose Christ Church Cemetery, and Ken picked the new section.  We arranged for Dad to secure two plots – one for Mom in the coming days, and one for himself hopefully still many years away.

Later that night, I was overcome with a feeling I couldn’t explain, like when you’re over-tired and nothing is right with the world.  I cried, mostly out of grief of pain and loss of my mother, but also because I was terribly unsettled about the plot and could find no peace.

At the breakfast table the next morning, before Ken arrived, I shared my feelings with Dad.

“I’m still wondering if we made the right choice.  You know how much Mom loved those oaks and the history and the beauty of Christ Church Cemetery.  I’m just praying that somehow, she sends us a majestic bird as a sign – something that can soar in the absence of a moss-draped oak tree – that will take our breath away and fill us with all-knowing peace that she likes the place.”

Dad sipped his coffee, barely looking up, and offered an understanding nod.

We worked through the other arrangements – from the red suit she’d worn to an interview when she got her job as a flight attendant to the fingernail polish color the young funeral home ladies inquired about, and I’d told them, “Paint them candy apple red to match that suit.  She can angel-glide through the pearly gates fully decked out in her favorite color!”

Dad already had the service planned.  I asked about the music.  Without pause, he replied, “No question about that.  How Firm a Foundation.”

Years later, watching the Jane Austin movie Emma with my daughter Ansley in a theater in Griffin, Georgia, I would hear the hymn and burst into tears.

It’s tempting to resist saying Dad rocked the funeral out of expectation for a bit more reverent vibe, but that’s exactly what he did.  He shared touching stories and happy memories – and prayed her straight into the arms of God for good. He’d officiated at his own mother’s and father’s funerals, too.  And Mom’s parents’ funerals. We somehow made it through that service that seems mostly a blur now, even as I realized at the end of the day that I’d used straight concealer as my foundation that morning – which was probably in all actuality a task guided by the hand of my mother, who knew my sleep deprivation required “a little extra.”  She seemed to be make her guiding presence known, still, in the quietest of ways.

As we moved from the funeral to the family graveside service, I was still struggling.  Hopefully, I prayed,  my face would not do what it always seemed to find a way to do, despite my best efforts – tell the truth.  I prayed it would not be evident to the three other people who knew my mixed feelings about the plot – Dad, Ken, and Briar.

As soon as we stepped out of the car, we heard the birds before we ever saw them.  The high-pitched screeching overhead was unmistakable, and Dad froze in his tracks.

“What have you done?” he asked, as if my prayer had been some magical spell gone sideways, like Aunt Clara casting a spell on an episode of Bewitched before disaster struck.

The four of us looked overhead, and there – circling where no oak tree would have allowed such a magnificent spiraling aerial show – were three large-wingspan birds.

Offering peace of mind and answers in a way that no hawk or eagle ever could have done.

Buzzards! I’d been expecting a hawk -which she’d never failed to point out when she spotted one- and holding out hope for an eagle, yet here were three glorious buzzards to calm my troubled heart.

“She showed up – – and she brought her parents,” Ken chuckled.  We watched as they landed on the branch of a tall tree at the edge of the cemetery, as if taking the back pew for the service, fluffing their wings as they settled in.

The humor of our mother, who loved all living creatures and whose last coherent words to Dad had been, “You take care of these dogs,” sparked laughter in us even as we grieved.

We still listen for a voice that we only know can only be hers in certain situations – in the silence, in the breeze, in the car when we’ve forgotten our seat belts or need a reminder to slow down.

One Reply to “I Picked the Spot, You Pick the Plot”