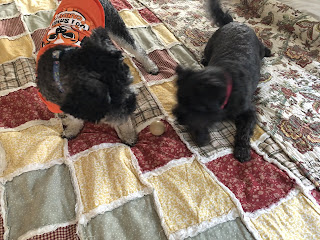 Today our host, Cara, inspired us to write an abecedarian poem with these ideas: The abecedarian is an ancient poetic form guided by alphabetical order. Generally each line or stanza begins with the first letter of the alphabet and is followed by the successive letter, until the final letter is reached. The form was frequently used in ancient cultures for sacred compositions, such as prayers, hymns, and psalms. There are numerous examples of abecedarians in the Hebrew Bible; one of the most highly regarded is Psalm 118 (or 119 by King James numbering). It consists of twenty-two eight-line stanzas, one for each letter of the Hebrew alphabet. Chaucer’s “An ABC” is an excellent medieval example of the form. He crafted his translation of a French prayer into twenty-three eight-line stanzas that follow the alphabet (minus J, U, V, and W).

While it seems natural for them to be 26 lines–one for each letter of the alphabet, they don’t have to be. The letters can weave into however many lines work best for you and the lines can be short or long.

energetic members of our

get up at an early

hour with me, never

X-ing out all writing solitude