Today’s prompt was to churn up moments from the past about healing. This one’s a Pantoum for my 27 year old daughter Ansley, who jokingly recalls the day her mama abandoned her in the bookstore. Thank God we can joke through all the “coulda been.” 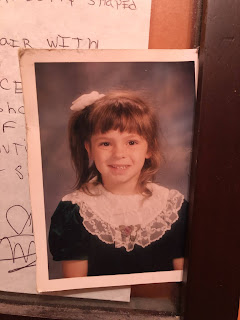 I said, “stay on the sidewalk” because the van was            ten safe feet from the doorbut she followed my only directionsshe was supposed to go to the vanbut as I drove away she stayed on the sidewalk

I had a meltdown when I realized I’d left herI’d stopped for milk and bread at Food LionI called to wake her but her siblings said,           “she’s not here”she wasn’t there – I’d left her on the sidewalk

“yes ma’am, she’s safe in the children’s section”TOTAL MOM FAILURE! would DFACS take her?Miss Maury was reading her a storymy meltdown shifted from panic to gratefulness