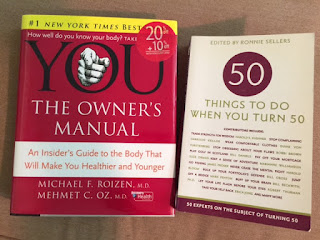 Very few positive thoughts come to mind as we consider the many aging issues that we face as we grow older.  Middle age is when we begin to realize that everything we’ve ever heard about physical health is true:  “It all heads south,”  and “Be ready to start falling apart; if it isn’t one thing, it’s another.”  For three years now, a week hasn’t passed that I haven’t given some dreaded thought to the looming colonoscopy that takes place at 50.  I deliberately timed my regular checkup at the end of year 49 so that I could buy myself an extra year before my general doctor made the official referral to the gastroenterologist.  And I knew it was coming.  “Most men and women should start having a Hemoccult test after age forty to screen for hidden blood in the stool.  After fifty, you should have a colonoscopy every three to five years to rule out colon cancer and to detect polyps that could potentially turn into colon cancer.  We know it’s an invasive process – but newer virtual colonoscopies are improving dramatically – and if Katie Couric can do it in front of a national audience, you can do it on your own” (Roizen & Oz 340).  I remember the day Katie Couric, wide awake, had a colonoscopy on live television as part of the Today show.  I remember the doctor saying, “And there’s your pretty little colon.”  That’s exciting for a pretty little Katie Couric, but not as well for the rest of us.
I knew when I took my husband for his first colonoscopy several years ago that it would take a great deal of mental preparation for me to willingly schedule a procedure that would allow anyone to go deep sea diving and cave exploring in my rear end and then beach me on a public shore where I would be expected to expel the air tank used on the mission – within earshot and possibly eyesight of a room full of others doing the very same thing, separated only by a thin fabric curtain.  I considered how I might cheat a little bit to trick the nurses into letting me go home early. I pictured myself sitting behind my curtain, inflating and then holding taut the opening of a large punch balloon and letting it rip, loud and long, and sighing deeply before sheepishly asking, “There. Can I go home now?”
Any female who has ever 1) had a clownish dad or an obnoxious brother, 2) been married and/or 3) raised a son should be immune to the embarrassment of bathroom humor.  It happens.  Not only does it happen, but often the men in our lives are overtly proud of their accomplishments. They brag about them.  They will summon us from the far end of the house or the yard just to see or hear things that they believe should earn them a title in the Guinness Book of World Records.  Then they laugh and smile with pride, expecting us to do the same.  These are the  very same men who wonder why cats bring dead birds and mice and deposit them on the welcome mat.
That’s probably the reason that I have two toilet rooms in the master bathroom that I share with my husband.  We share a common shower, but we have separate sinks and toilets; and those toilets each have a room with a locking door.  What happens in these rooms stays in these rooms.  No questions asked, no trophies earned.
When the directive was given by my doctor to schedule a colonoscopy, I reluctantly followed her order.  I scheduled the procedure and ordered the prep, which consisted of 5 laxative tablets, a bottle of EZ-2-Go, lemon flavored gelatin mix, 3 packets of chicken broth powder, an assortment of individually packaged wet wipes, and 2 packets of Gatorade. I completed all the medical history paperwork dating back 51 years and attached my insurance card.  Then I began to worry and bite my nails as I counted down the days. 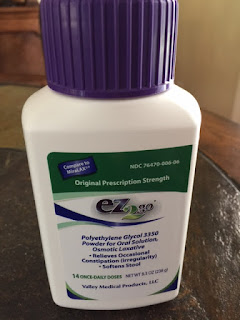 I also began reading, because it’s like one of those ladder fire escapes that you see outside big city apartments for when the building is on fire and you’ve got to get out FAST.  When I read, I find that one minute I can be a breath away from a panic attack, and the next I find myself transported to a place of great peace.  A simple book became the best mental medicine for me.  Dr. Patricia Raymond, a gastroenterologist who is the founder of Rx For Sanity (RxForSanity.com) and author of Colonoscopy: It’ll Crack You Up!  became a hand-holding friend of mine as I read her chapter of Fifty Things to Do When You Turn Fifty (Sellers 135).  She assured me, “Okay, it’s nasty.  But all you need to get through this life-saving rite of passage is a sense of humor.”  I wondered about how to achieve that, and I read further.  She became a close, comforting friend who was visiting me in my living room to convince me that I was taking myself far too seriously and to reassure me that I was going to be fine.  Her puns were on point.  Maybe she was right.  Perhaps all I needed was a sense of humor.  Here’s the part that explained how to have a sense of humor about a colonoscopy: “The key is having fun while you’re doing it.  For instance, I encourage my patients to decorate their bottoms to celebrate various holidays that fall on or near their scheduled colonoscopy.  Over the years, I’ve been greeted with hearts, pumpkins and black cats, even an American Flag or two.”  Instantly, I knew that my colonoscopy could in fact be fun.  I took snapshots of the pages of her chapter and excitedly sent them to my brother, Ken, who knew how badly I was struggling with anxiety over the whole thing.  I sent the pages along with a text that said, “That’s it!  I’m decorating my ass for my procedure! Read this article.”  I couldn’t wait to share the idea with my husband, and was on my way to show him what I had found when I received a text back:  “This may be the best text I have ever received.  Ever.”  Only it wasn’t from Ken.  I had sent a group text by mistake.  Technology mishaps – yet another pitfall of middle age.
Every shade of red later, after the initial embarrassment of the text wore off, I began designing my graphic surprise.  I decided to use a running theme (which, I realized later, was even more appropriate than I had imagined).  I thought of the oval car stickers with the mileage numbers for 5Ks, 10Ks, half marathons, and marathons.  A 6.2 sticker was designed for my right rear-view mirror, and a 3.1 sticker for my left.  Spanning both sides, to indicate the start and finish line of the “race,” I designed a banner that said, “May the winds be gentle, the course free of obstacles, and the finish fast. Ready, Set, Go!”  The planning of the design took my stress away and allowed me to focus on the creativity of adding an element of surprise for the medical team performing my colonoscopy. 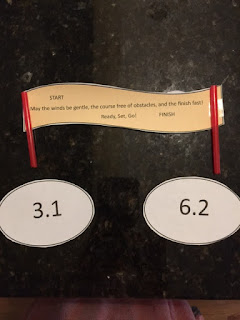 As I had hoped, the doctor was shaking his finger at me and grinning as he approached me to deliver my report when it was all finished:  a healthy colon, and a healthy sense of humor.  I hadn’t predicted his retaliatory prankish nature, though.  With a straight face, he said, “We’re in the process of updating our Facebook page.  You won’t mind if we use your photo of your design, in place, on our page….(and then his devilish smile appeared) will you?”  On the afternoon of my recovery phase, I’m already planning my next colonoscopy bottom design.  Ten years is far too long to have to wait for the next screening!
Works Cited
Rozien, M. and Oz, M. (2005). You – The Owner’s Manual: An Insider’s Guide to the Body that Will Make You Healthier and Younger.  New York: HarperCollins.
Sellers, R. (2005).  Fifty Things to Do When You Turn Fifty.  Portland:  Sellers Publishing.