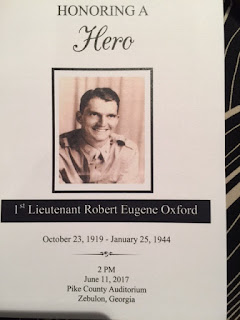 Honoring a Hero of the Greatest Generation

Yesterday, the rural Georgia city of Concord buried its last remaining soldier missing in action from World War 2.  First Lieutenant Robert Eugene Oxford died on January 25, 1944 at the age of 24 when his plane crashed in the Himalayan Mountains while he and a crew of seven other men were on a cargo flight carrying medical supplies to China.  A recovery team identified his remains in 2016.  After more than 73 years, Lt. Oxford has finally been laid to rest near those who loved him best but who died never knowing what had happened to him.
Memories of his life were shared by distant family members and friends who had kept his letters and stories alive throughout the years.  When he went off to war, he left a fiancée, Susan Brown, whose best friend stood beside the road waving a flag as his remains were brought from the Atlanta Airport to the funeral home.  Though Susan married later in life, she had always said that when he came home, she’d be there to welcome him back; but a year ago, she joined him in Heaven and finally knew what her best friend, standing by the road in her absence, and the rest of us would not know for a few more months. 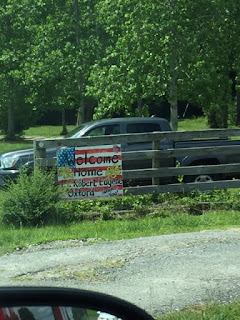 Ceremonies honoring Lt. Oxford were impressive beyond those of a proper returning hero’s welcome.  A commercialairline honored Lt. Oxford in a military ceremony as passengers debarked the plane on which his remains had been flown home.  People tied yellow ribbons and waved flags as they lined the streets from the Atlanta Airport to the funeral home in Zebulon.  The funeral ceremony was held in the school auditorium because of the need for plenty of seats, and the procession from the funeral home to the cemetery spanned 8 miles and increased in the number of citizens with yellow ribbons, flags, and Welcome Home signs as Lt. Oxford got closer to Concord.  The cemetery service featured full military honors, with a 21-gun salute, a flyover with the missing man formation, and Taps.  Something else that was impressive about these services is that the Chinese population in attendance equally matched that of the Americans in attendance.  Because Lt. Oxford had been on several missions that delivered supplies to the Chinese, he became a hero in their country as well as ours, and the Chinese delegates sent gifts to the family to express their appreciation for his service.
At the funeral, Reverend Jeff Overton referenced Tom Brokaw’s Greatest Generation, in which Brokaw tells stories that prove that Oxford’s was a generation who understood what it meant to serve.  As I thumbed through the pages of the book when I returned home, I found an interesting observation that Brokaw made as he and his wife Meredith traveled together talking to veterans.  He told her, “The men tell the stories best themselves….Whenever one of these guys comes over to say hello, just ask, ‘Where were you that day?’ You’ll hear some unbelievable stories.”  This reminded me of the importance of stories in Tim O’Brien’s The Things They Carried.  O’Brien, throughout his book, sketches an overarching theme of the significance of stories not only in the healing process, but also in survival itself.  He says of war stories that “’In any war story, but especially a true one, it’s difficult to separate what happened from what seemed to happen……In many cases, a true war story cannot be believed.  If you believe it, be skeptical.  It’s a question of credibility.  Often the crazy stuff is true and the normal stuff isn’t, because the normal stuff is necessary to make you believe the truly incredible craziness.  In other cases, you can’t even tell a true war story.  Sometimes it’s just beyond telling.”  Lieutenant Oxford, I am certain, had many of those types of stories – and it saddens me that he never had the opportunity to tell them to a wife, his children, or his grandchildren.  He sacrificed his own opportunities so that others could have the freedoms we enjoy today.
O’ Brien also says that a true war story is never about the war, but instead is about sunlight and the special way that “dawn spreads out on a river when you know you must cross the river and march into the mountains and do things you are afraid to do.  It’s about love and memory.  It’s about sorrow.  It’s about sisters who never write back and people who never listen.”  Lieutenant Oxford lost his life on a mountain serving others.  He made the ultimate sacrifice.
“Stories can save us,” O’Brien concludes.  “In a story, which is a kind of dreaming, the dead sometimes smile and sit up and return to the world.”  That’s exactly what happened in Pike County yesterday.  Through the stories shared about Lieutenant Oxford, passed down from generation to generation, he smiled, sat up, and returned to the world to be honored the way he deserved.  Reverend Overton said it best:  “His life of service continues today, in the form of inspiration to serve to make this a better place.” Though the timing of his return may seem unfortunate and long overdue for his family, the timing of Lieutenant Oxford’s return was perfect for such a time as ours – when we all need a powerful reminder of what it means to truly serve and sacrifice the way that the heroes of the greatest generation did!
References
Brokaw, T. (1998). The Greatest Generation.  New York: Random House.
O’Brien, T. (1990). The Things They Carried. New York:  Penguin Books.