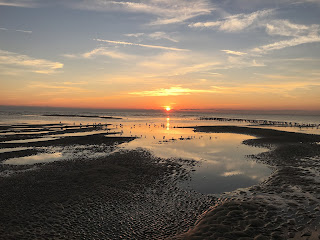 The Dawn of a New and Glorious Day

A little over a year ago, in the aftermath of my mother’s death, my dad channeled his grief into photographic creativity by taking early morning walks on the beaches of St. Simons Island, Georgia.  During these walks, he captured glorious sunrises and often challenged my brother and me to caption them.  The images always arrived between 7:30 and 8:00 a.m., just as our high school students were arriving in our classes.  We’d eagerly text back hurried first-impression expressions such as, “New Horizons,” “Ominous Threat,” or “Meandering Waterways,” as each picture suggested.  As the school year wore on and Dad’s grieving entered new stages, the photos became less frequent, but certainly no less impressive.  His days started with an eye seeking beauty in a dark place of his life, preserving and sharing the images, and ours began with powerful reminders of our roots on the Georgia coast – even as both my brother and I were living in central Georgia.

I fell in love with A Sand County Almanac by Aldo Leopold in 2008 when I attended a teacher workshop that was held at the Jones Ecological Center in south Georgia.  Nightly reading assignments were anything but dreaded; in fact, they became the highlight of my day as I pored over the magnificent analogies and imagery that Leopold described.  Here was an author who could take complex concepts and simplify them so that even the most novice naturalist could grasp a solid understanding of his ideas.  His observations about nature and his warnings reminded me of Chief Seattle’s message to future generations about the importance of nature conservation and the priority it deserves.  Not surprisingly, Dad’s morning pictures often inspired me to return to the wisdom-rich text for insights and caption-worthy phrases.  Caption searches led to re-readings of the dog-eared text, and two excerpts stood out as I reflected upon several weeks’ worth of photos:

“Ability to see the cultural value of wilderness boils down, in the last analysis, to a question of intellectual humility.  The shallow-minded modern who has lost his rootage in the land assumes that he has already discovered what is important; it is such who prate of empires, political or economic, that will last a thousand years.  It is only the scholar who appreciates that all history consists of successive excursions from a single starting-point, to which man returns again and again to organize yet another search for a durable scale of values.  It is only the scholar who understands why the raw wilderness gives definition and meaning to the human enterprise” (Leopold, 279).

“To build a road is so much simpler than to think of what the country really needs…..but all conservation of wilderness is self-defeating, for to cherish we must see and fondle, and when enough have seen and fondled, there is no wilderness left to cherish” (Leopold, 107-8).

I’ve heard it said that grief begins before a loss.  My brother and I lost our mother, and Dad lost his wife long before she drew her last breath.  Parkinson’s Disease battled her spirit and won the long-fought war of Mom’s earthly life.  Her death, our grief, was unavoidable.  Not all loss and grief is inevitable, though.  My hope is that the raw wilderness that Leopold describes will not be lost or grieved in my lifetime – or in that of my grandchildren’s, and that we seek and seize opportunities to cure the diseases of political and economic empires that threaten to diminish the rich meaning of the human enterprise.  The captioned “Ominous Threat” we sense can still become a “Heeded Warning,” a “Miraculous Hope,” and the “Dawn of a New and Glorious Day.”