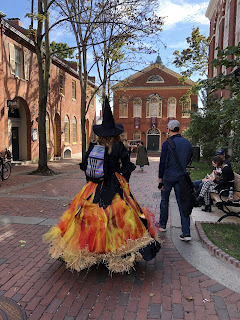 When a witch at night goes

walking with a witch, at times
a black cat will appear and a
witch will pretend not to know. A witch
will try not to cackle but will
turn her head to not seem
suddenly to be privy to pranks
and in looking serious will struggle to pretend she’s at peace against truth.
To keep her promise to an elder, she’ll
look at her own shadow, unknown
at dark, an image she’ll force into something lionish in appearance, stronger than
very evil spells, a prank funnier than a small cat in a window, then reveal herself!
A triple golden shovel poem using three vertical lines from Elizabeth Willis’s “The Witch”