are we becoming a nation of hoarders whose houses reek with a stench of old, rotting stuff?

for example, storing dishes in cabinets in other rooms because kitchen cabinets are used for other stuff

before her death, she favored disposable food containers over the food in them – for storing small stuff

when children clean stuff out, parents feel grief and anger and eagerness to fill the newly vacated space with new stuff

1993 – Frost and Graves wrote an article entitled “Behavior Research and Therapy” and in 2010 Frost and Steketee Hattie wrote “Stuff: Compulsive Hoarding and the Meaning of Things”

which she says is “if not an actual sin, a failure of self understanding” 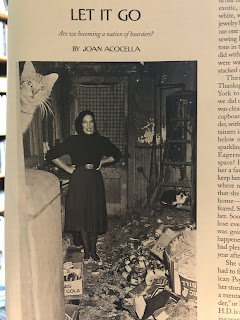