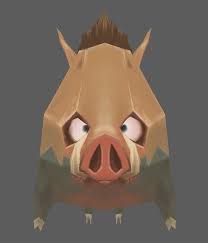 The Legend of the Three Pigs

A little bit sideways is all you gotta be to end up here.

In the spring of 1971, three farmhands were
clearing a path for cattle fencing
when they heard the warning grunts and squeals
and turned to see three sets of tusks charging.
They dropped their tools
and ran for their truck.
Two made it, but one tripped on a stump
and fell flat, fearing the worst.
The two on the tailgate turned
and trembled in horror
as the wild boar closed in for the kill,
coming face to face with their comrade –
but at the last minute, the pigs zigzagged
and veered sideways like drunk moonshiners
wobbly-wheeling away from revenuers
approaching an unslashed still.

No one ever believed the story,
but folks always acted amazed when
the guy on the ground explained
what had saved his life.

“Them pigs was cross-eyed.”

The Johnson Funny Farm was born that day,
A place where impending doom is transformed into
the miracle of survival –
a joyful place of rescue for humans, animals, and plants –
a place where a farm sign with
three cross-eyed pigs
greets guests –
a place where even something as simple
as connecting to “wi-swi” remains
a tribute to three legendary wild swine
with the password #crosseyedpigs.

A little bit sideways is all you gotta be to end up here.