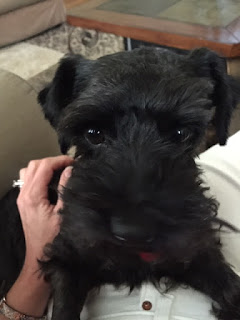 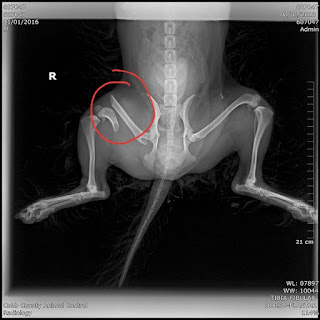 For his uncle calls him Rorschach, like the ink blot he appears to be in photographs.

For he is not photogenic.
For he will bite the finger that points at him.
For he goes wayward if let off his leash outdoors.
For he runs from scissors.
For he is far too dignified for silly play.
For he is appalled and offended by rough play.
For he squeal-barks and whines like a baby girl when he sees a deer or squirrel in his yard.
For his humans have to spell the words D-E-E-R and S-Q-U-I-R-R-E-L.
For he taught his brother Boo to lift his leg when sprinkling.
For he also taught his brother Boo to catch popcorn in mid-air.
For he kneads and nooks his toys to soothe himself.
For he camps out on the back of the couch.
For he prefers to be outdoors with his nose to the ground, digging a hole and smelling everything.
For he scratches off after his business like four match-heads that won’t ignite.
For his breath is worse than a truckload of rotting goat carcasses.
For Greenies have not cured his Halitosis.
For he is a silent stalker who strikes his brother Boo without warning.
For he will devour unattended dinner plates.
For he is a food hog.
For he eagerly awaits his treats at established intervals throughout the day.
For he is fed breakfast in bed on weekends.
For he will snap at anyone who gets too close to his female human.
For he naps on the purse shelf in his female human’s closet.
For he throws himself against the door in excitement when his humans arrive home.
For he demands physical attention by rooting hands with his nose.
For he is loved and adored and nurtured like the sweet baby that he is.
-Kim Johnson