Poetry Challenge from Travis Crowder – Write a poem that mirrors an existing poem
that you enjoy. 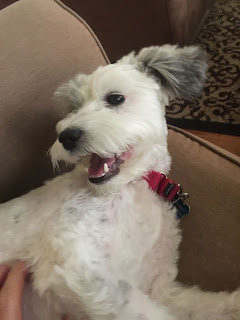 For I Will Consider My Dog Boo Radley

For I will consider my dog Boo Radley.
For he was rescued from the grief of neglect and abandonment.
For he was alone and starving and trembling in a crate in the back of a van.
For his rescue name was Einstein because of his wild and matted hair.
For he was chosen by Kim but bonded with Briar.
For he was re-named Boo Radley because he spent time behind a closed door.
For he is of the tribe of Schnoodle.
For his Schnoodlehood is a mixture of French and German.
For he is highly territorial about his pillows and blankets.
For when he is picked up, his ears sag down, but when he is put down, his ears perk up.
For he lives by a predictable routine of quirky habits and idiosyncrasies.
For one of his favorite games is glove wars.
For another of his favorite games is teasing keep-away.
For another of his favorite games is pant-leg-tug-of-war.
For he threatens wildlife ferociously but seeks protection from the ding of a cell phone.
For he merely tolerates his rescued brother Fitz.
For if he meets an admiring stranger he will chastise her harshly for cooing over him.
For he has an angel harping on one shoulder and a devil pitchforking on the other.
For when both of his humans are not home, his world gets tilted and he takes to his kennel.
For he lies on the back of the chair and rests his head on his humans’ shoulders to read their books and emails.
For he licks his lips to request his bedtime drink from a bathroom cup instead of a water dish.
For he punishes himself and assigns his own timeout in the kennel when he regrets his mischief.
For he is the bed police, Mirandizing anyone who moves a muscle.
For he keeps watch over his humans by night and sleeps by day.
For he puts his nose out the car window and breathes the exotic air when we go on safaris.
For he prances about the house like a show pony with his whale-spray tail.
For he catches popcorn.
For he gets tornadic zoomies indoors and rearranges all the furniture.
For he breakfasts upon plain yogurt and graham crackers in bed on weekends, lying like the Sphinx.
For he is now loved and cherished.
For he rules the Johnson Funny Farm.